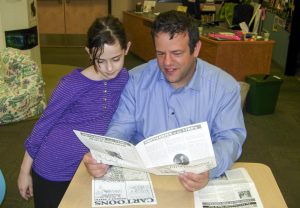 Read all about it!! The students in Mrs. Kate Badger and Mrs. Jennifer Mann’s classes wrapped up their study of colonial times and the U.S. government by creating a newspaper: The Downtown Daily.

In order to build the newspaper students dissected a real newspaper, applied for positions on the news staff, and acted as reporters, junior editors, layout specialists, advertisers, and more.

When completed, the classes hosted a “Press Release” where students shared headlining news in government past (during the Revolutionary War) and present.

Parents and guests were then invited to enjoy tea and biscuits while browsing their copies of The Downtown Daily. The event concluded with a question and answer period where students could share what they learned and discuss their newspaper responsibilities.